Hydro-Quebec (HQ) has developed a technology to produce thin lithium metal with a uniform surface. This lithium technology will be used to produce ultra-thin anode films for the SAFELiMOVE project. In parallel, ABEE explores the best protection of the lithium surface to make it more stable.

However, using ultra-thin thicknesses of lithium metal, to achieve higher energy densities, increases the complexity of its handling. Therefore, HQ has developed a unique expertise to establish a way of working with such a thickness. The thickness of the Li-metal is achieved in a single pass by strongly compressing the ingot followed by another successive lamination step to further reduce the thickness to the desired value. 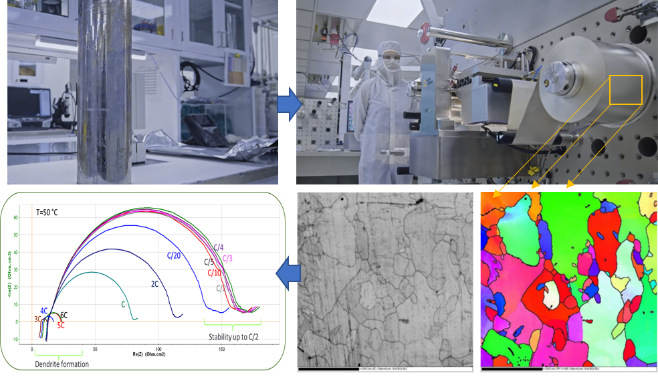 During this process, the lithium is in an extremely reactive state, therefore, the atmosphere in which the lithium is extruded is important, which defines the state of the final surface of the film (Fig.1).

A thin lithium film with a thickness varying between 50 and 40 µm was successfully produced from the lithium ingot following this process (Fig.1). Then, these lithium films are shipped to SAFELiMOVE partners, which will then be used as anode material for cell assembly and prototypes. Having a thin and uniform surface will promote low interfacial resistance and longer cycle life.

To further improve the robustness of lithium/electrolyte interface, surface coated of lithium has been performed at ABEE. Different coating thickness (5, 10 and 15 nm) of Al2O3 and ZnO2, was achieved using thermal evaporation technique. These protected foils were subjected to plating/stripping tests with SAFELiMOVE electrolyte (Fig.2). Lower polarisation is achieved with protection of Li with Al2O3 over the full current range.